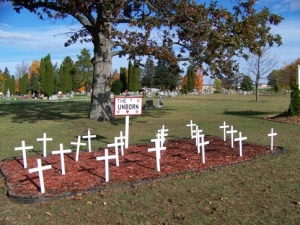 Recently I spent some time at Barnes and Noble and way too much on a cup of coffee. I was reading a book called “Velvet Elvis” by Rob Bell. The book was such a blessing. In it, he told a story about his friend Matt who had visited a couple who had just lost their newborn baby.

Born at two pounds, it wasn’t ready to make it’s entrance into the world. As Matt entered the room, he noticed that the baby was still in the room with the grieving couple. After greeting the couple, Matt went over, picked up the baby, and kissed it on the forehead.

Tears welled up in my eyes as I read this. It got me to thinking about how precious life is and…. about abortion.

I used to live down the street from a “Planned Parenthood” which is one location where babies are put to death every day accross our nation. While driving by, I would often see people out on the street praying. Some times (most times) they would have posters. Posters with graphic pictures of babies that have been mutilated and parts of children found in medical waste.

Like most people, I was disturbed that they would show these pictures and wished that I didn’t have to see them. I was mad at these picketers for disturbing the public (me) with these graphic pictures. But then I began to see things in a different light. How much more shocking and disturbing that murder is legal in America!

I recently watched the movie “Amazing Grace”. (Watch the Trailer HERE). It is the story of a man named William Wilberforce who devoted his life and political career to abolishing the slave trade in England. In spite of much hardship and setbacks and after a long a tiring effort, he finally overcame.

His opponents were convinced that a sudden end to such a profitible market would spell financial ruin for England. And so it was allowed to persist for years. Year after year Wilberforce would propose his bill, each time ending in defeat, until public opinion shifted to such a degree that the opponents didn’t have a leg to stand on. The outcry against slavery had become greater than the voice of those profiting from the travesty of slavery.

Tell me, would America suffer economic ruin, if we were to end abortion say… today? To those who are profiting from this business of death, shame on them!

As Scriptures say, “the love of money is the root of all kinds of evil.” Do you think that those involved in other such evils (such as modern day sex slavery and porography) would stay involved if there were no profit? If there were no one buying their product, their business would fail.

Does it strike anyone else as odd (and shocking) that there exists places where mothers can murder their children and furthermore, that it is legal?

I was inspired by the movie Amazing Grace but I am not a politician or a lobbiest. I am at a loss of how to fight this evil or effect any sort of change.

While at Barnes, a woman sitting accross from me held her six month old baby boy. He was “waving” (holding out his arms in a general direction and clenching and unclenching a fist) and smiling at those around him and generally evoking so much joy in everyone who happened to observe this sweet innocent child. This preciousness is worth fighting for.

Children are models for us all, as Jesus pointed out. They are uninhibited, unpreoccupied with self. They display what most of us have lost with our “reserved” and “dignified” ways. We don’t look at eachother in the eye as children do. When have any of us felt awkward at a babies stare? No, we instead feel honored and blessed by their notice. They are little angels – God himself supplying their joy. The first thing they learn is how to smile; and as I have obsereved from my work in nursing homes, it seems it is the last thing that we as human beings forget.

I am not into politics. In fact, I have lost all faith in politics. Politics will never be the answer. My wife cajoles me into getting out to vote, but when I do, the only issue that I am voting on is this:

Who will fight for the unborn children?

For me, this is the only issue.

Please do what you can do for those powerless to save themselves.

This is my neice. Her mother was advised by the doctors to abort the baby to prolong her life as she was diagnosed with terminal cancer of the blood. She refused the idea immediately and chose to deliver the child and expected, for all practical purposes, to die soon after.

We all prayed a great deal for her and the Lord saw fit to heal her completely of her cancer. Her baby is a now a joy and delight to their family – and I must say that she is the happiest baby I have ever met. She is always smiling, full of joy.